We use cookies to make your experience better. To comply with the new e-Privacy directive, we need to ask for your consent to set the cookies. Learn more.

Amorphous silicon does not form a regular crystal structure, but irregular atomic arrangements. It is created in a plasma reactor by chemical gas-phase deposition of gaseous silane. This saves both energy and material in the manufacturing process, which makes these cells very cost effective. Amorphous silicon cells are very temperature resistant and can be easily adjusted to individual requirements in terms of size, design and capacity. They can be connected in series at the same time the cells are formed, making easy to create panels in a variety of voltages. Most flexible solar modules are made of amorphous technology.

A special type of silicon solar cell is the so called back contact cell. They have both positive and negative metallic contacts on the rear surface. That allows the surface facing the sun to be uniformly black, without the metal electrodes present on most solar cells. The back contact cell structure enables the module to gain more electricity per unit area and leads to a more favourable appearance.

CIS stands for Copper, Indium and Selenium and CIGS stands for Copper Indium Gallium Selenide. The CIS/CIGS technology is normally often used for flexible solar modules. The CIS/CIGS absorber is deposited on a glass or plastic backing, along with electrodes on the front and back to collect current. The semiconductor layer uses the broadest light of all solar technologies. CIS/CIGS cells achieve high conversion efficiencies at low production costs, thanks to the fact that they have the highest spectral response of all photovoltaic technologies. They are suited for application on flexible substrates and can be fabricated on thin polymer foils without any compromise of conversion efficiency 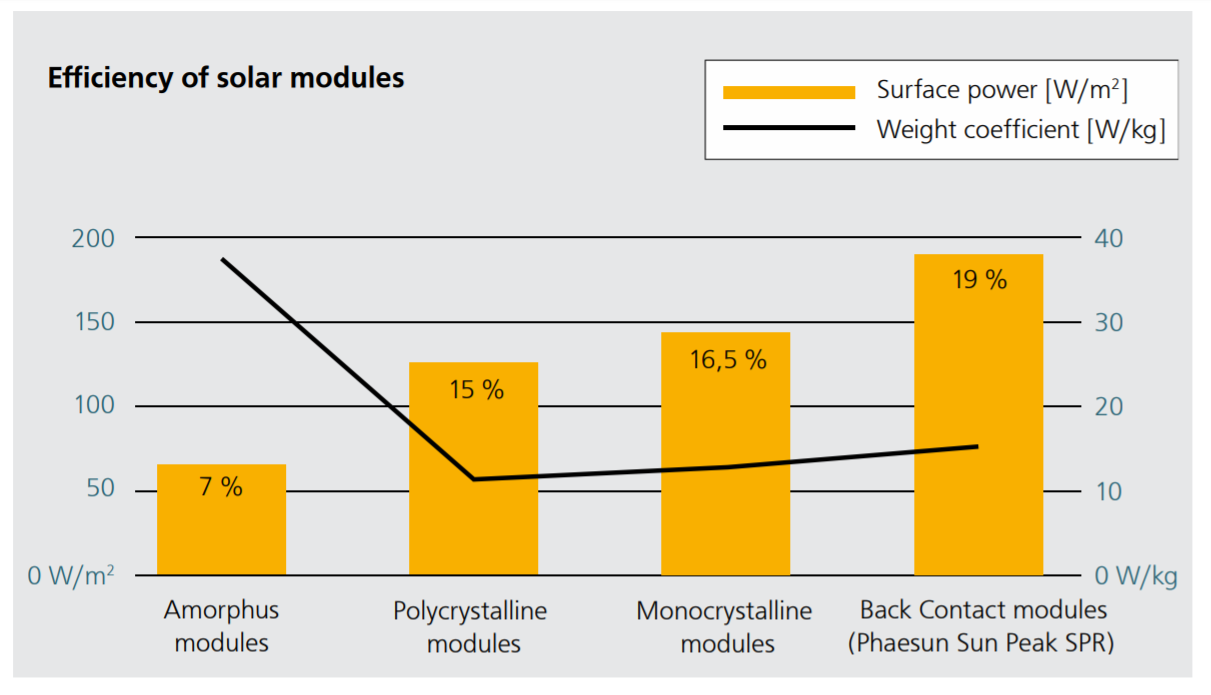 From the cell to the module

Individual solar cells are interconnected to modules with higher capacity. They are connected in series and in parallel in order to be able to provide voltages or capacities appropriate for the different fields of application. A series cell connection results in a higher voltage, a parallel connection involves a higher current. Solar modules are offered for different applications with different nominal capacities and voltages. The solar module specifications refer to the standard test conditions of 1000 W/m² sun irradiation with 25° cell temperature. Most Off-Grid solar modules are made out of 36, 72 or 142 cells to get a favourable voltage for the battery of 12 VDC, 24 VCD or 48 VDC. Standard modules for grid-connected systems have 60 cells.

The terms „male“ and „female“ refer to the electrical contact inside the plug case, not to its visible appearance.

There are also tool-free plug systems available which have 2 essentially different characteristics:

Waterproofness of the plug case is not guaranteed products of different manufacturers are used.

The durability of the plug system may be reduced if electrical contacts of different manufacturers are incompatible with materials and contact erosion is involved.

Preliminary survey of the location and the proper arrangement of the PV array are important to maximize energy production of the Off-Grid PV system. The PV array needs to be installed with a proper tilt angle, azimuth angle and with the minimum of shading.

PV arrays are most efficient, when they are perpendicular to the sun‘s rays. The default value is a tilt angle equal to the station‘s latitude. This normally maximizes annual energy production. The closer the system is installed to the equator the smaller should be the tilt angle.

However, the farer the system is located from the equator the more the sun‘s path and the solar altitude vary throughout the year. In Europe for example the solar altitude during summer reaches 60 – 65° whereas in winter solar angles are as low as 13 – 18°. That means that the prefect tilt angle varies throughout the year. To optimize capture of solar panels a tilt angle of 28 – 30° in Europe is recommended, plus 15° in winter, or minus 15° in summer. 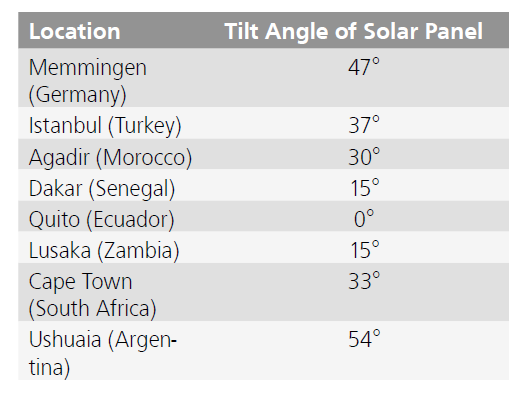 The closer the system is installed to the equator the smaller should be the tilt angle.

To maximize the collection of the daily and seasonal solar energy possible, PV modules should be oriented geographically. A solar panel facing the equator promises the highest energy yield. In the northern hemisphere the optimum orientation for a PV module is true south (Azimuth 180°), in the southern hemisphere it is true north. However, PV modules can face up to 45º east or west of true south (or north) without significantly decreasing their performance.

The electrical output of photovoltaic cells is very sensitive to shading. Even when a small portion of the panel is shaded and the rest remains in sunlight the electrical output decreases drastically. Shading from trees, poles, aerials, chimneys, existing or future buildings in the neighbourhood all have a major impact on photovoltaic energy production. The decreasing energy production due to shading has its electronic explanation in the series connection of solar panels. Due to a reduced flow of electrons or worst case electrons reversing course through the shaded portion of the p-n junction the power production of the whole  PV array suffers.