We use cookies to make your experience better. To comply with the new e-Privacy directive, we need to ask for your consent to set the cookies. Learn more.

How much energy brings a solar module really?

Solar modules are tested in the laboratory under standard test conditions. The irradiation (1,000 W / m2) and the temperature (25 degrees Celsius) play a role, and the angle of incidence is of course ideal. A peak value is obtained which is expressed as Watt Peak (Wp) and which can be equated with PS in the case of the car. No practical conditions such as the position of the module, fogging, shading or soiling are considered. As a rule of thumb, a mean value for modules can be taken for Germany, which corresponds to 4 times the value of the nominal power. This means that a 60 watt module generates a 240 watt-hour (Wh / d) current in Germany, which corresponds to a current of approx. 20 amperes (240 Wh divided by the present system voltage, in this case 12 VDC). This does not take into account the type of module.

How many modules do I need to cover my needs?

This depends on the sum of your electricity consumption. The number and required power of the modules depends on how long you want to be selfsufficient, or whether you only use your system on certain days. You can switch several modules in parallel and thus increase the overall performance. In case of doubt you should have the question answered by your specialist.

Do I need an extra battery for the solar system, or can I use my existing battery?

In principle, you do not need a new battery for the solar system, if there is a build-up battery in your vehicle, boat, holiday house, etc. However, an additional battery can be used as a buffer for the solar current. The larger the buffer, the more you can feed. If you are thinking of installing a second battery, please remember that these must have the same strength and should be as close as possible. You can not pair a lead / acid battery with a gel battery. These two would unload each other and break down within a very short time. Also make sure  that the date of manufacture is not too far apart because a new and an old battery can also be discharged from each other.

What battery size do I need?

That depends on your consumption. The larger the capacity of the battery (bank), the more and longer you can remove power. Of course, the space requirement also plays a role because you can not install the second or third battery anywhere. Therefore you should draw a small energy balance of the loads and take the determined Ah value four times to be on the safe side. Then you know how big your battery must be and can act accordingly. Remember, a small battery is full faster, and if the solar system is larger, the excess is not used. The solar system is always only as good as its storage, which one makes available. For the winter, a small solar module can be used to keep the battery working. This is then further loaded and can not be broken. As a rule, today's solar systems require battery sizes from 100 Ah upwards, as consumption is constantly increasing.

What type of battery should I use?

Each battery has certain advantages and disadvantages. As a rule, gel batteries are already used by the factory as a load battery, so that the Womo driver has no choice but to buy them. The fact is, however, that a gel battery according to the manufacturer's statements needs a charge according to the IOU characteristic every ten to twelve weeks in order to reliably perform its work over a longer period of time. Phaesun has been working successfully with AGM batteries in solar systems for years. Over the years, we have installed more than 10,000 systems with AGM batteries, because of their low internal resistance, these are ideal for such applications. In addition, there is a very high power density, an optimum use of space and a good cycle capability. Also, as a rule, the costs are lower than, for example, e.g. for gel batteries.

Why do I need a solar system?

My last camper had also one, but I never used it. This is now a typical example in which a plant was designed so well that the cycle of loading and unloading was precisely coordinated. The plant has brought the customer during the day enough yield and probably even a bit more to use it in the evening, so that in days with little light enough in the batteries was available. Here you can see how important the exact layout of the system is. With well designed solar systems, you do not have to worry about anything else.

Can I install the system myself ?

Spontaneously, you could say, "But of course you can do this if you do not have two left hands." But it depends on the area, because a cable must always be inserted somewhere to get to the battery. In the Womo area one would say, if the vehicle is older than six years, then yes, because from then the leakage guarantee is extinguished. In the boat and holiday house area, the building itself is almost always expanded, so that the question of tightness there is superfluous. Basically Solar technique is not sorcery, and one works there normally with weak current. Certain knowledge and experience may not be missing during the installation of the solar system.

Which different module forms are there?

The standard modules usually have an aluminum frame and a hardened glass surface. These are fixed with a bracket and are also tested for hailstorms. Furthermore, there are the so-called Marinemodules. These are semiflexible modules, which can be walked on and are usually equipped with a stainless steel back to be seawater resistant. Most of them are glued. In addition, certain marine modules have 39 or 40 cells in order to be able to process the temperature differences better. The best results are not always achieved at high temperatures, so the yield losses are minimized by a higher output voltage in the module. The third form is flexible, light, and rollable modules, made in thin-film PV technology. They can be used flexibly and can be quickly stowed when not required. The disadvantage of these modules is their large area, which generates little yield in relation to crystalline technologies. Advantages are, however, their low weight and flexible use.

What about large consumers such as the refrigerator?

In today's world you would like to have the comforts of your home in the camper, boat or holiday home. There is clearly a cooling possibility. The normal refrigerators in the 12/24 VDC range are based on the absorber technology, that is, they can be operated via gas, 230 VAC or also with battery current. Here, the consumption for solar is usually too high to operate properly. However, there are so-called compressor refrigerators - boxes or chests, which are characterized by low running power and less power consumption. These devices are quite suitable for working with a solar power supply.

Nowadays  there are so many modules on the Internet, how do I find among all this offer the right one?

The price of solar modules has been falling steadily for years. The price reduction is due to raw material costs, new manufacturing technologies, mass production and the much greater competition worldwide. To decide among the big offer what module is right for you, of course, is always difficult, because usually the price is tempting. But be careful: you never know what is behind it! As in other  areas, the price does not come by chance. There are a large number of suppliers selling modules from overproductions or from dubious manufacturers worldwide.

What output is obtained with interconnected solar cells?

What happens when the solar panels are connected in series and parallel?

How do PWM and MPPT charge controllers work?

A PWM controller connects a solar module to a battery, the current then flows through the controller to the battery. The module voltage almost breaks down to the battery voltage. Basically nothing else happens than in the example above when we connect a solarmodule directly to a 12 V battery. But when the battery becomes full (the absorption voltage is reached), the solar regulator starts working. It separates the module and battery from each other and when the battery voltage has dropped a few millivolts, the solar moduleis switched on again. This process takes place several times per second. This control mode is called pulse width modulation (PWM). Solar modules deliver a certain current depending on the sunlight. This current is independent of the module voltage. Consequently, the same current flows at 18 V or 13 V. However, the module delivers a power (measured in watts). The power is the product of voltage and current. Anyone who paid attention in physics at that time knows that it is possible to calculate electrical power simply by multiplying voltage and current. As a result, the power at 18 V is higher than at 13 V if the same current is used as a basis.

MPPT = Multi Power Point Tracking - in English about as much multi point tracking. An MPPT controller scans the power curve of the solar module and finds the highest power point. Usually a module delivers the maximum power at a voltage of 16-18V. The power of the module is then converted to the battery voltage, like a voltage converter that converts 12V into 230V or 24V into 12V. This method is so effective that despite the losses in the regulator, much more power is transferred to the battery through the voltage conversion than with a PWM regulator. Here is a short example:100 Wp bring (exemplary!) in the sun 18 V and 5 A (corresponds to 90 W). With a PWM regulator you could charge a 13.5 V battery with 5 A charge current. Which corresponds to a power of 67.5 W (at exactly 13.5 V). With a MPPT regulator the 5 A and 18 V are converted to battery voltage and at 13.5 V 6.66 A (90W) flows. 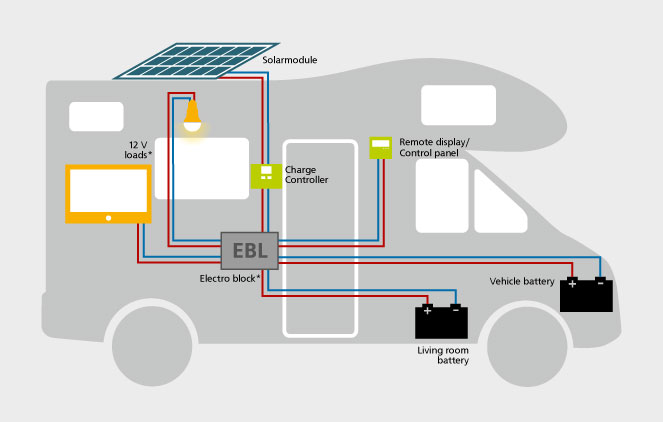